Took my second trip up to VMAC for training camp on Sunday, and I was sort of lucky that it turned out to be the mock game. I was also lucky enough to be granted permission to share pics of the day from Twitter friend Vannessa Kralovic (@vannessa_f  and  http://www.vannessakralovic.com/).

First, let’s talk about the non-competing DL. There were quite a few players out from the jump, and then a couple more left early after drills.

So that’s an uncomfortable number of players held out. On top of that, at least two went out early in practice: Deshon Foxx (almost assuredly a hamstring) and Frank Clark (still his calf). That’s exactly 20% of the roster some manner of dinged-up.

In place of all those injured RB’s, Alex Collins got the bulk of the workload. He looked okay running, but the pleasant surprise was seeing how well he is catching the ball out of the backfield. AC360 had one of the biggest explosive plays of the day catching a wheel route down the far sideline, and then running for a good 25 yards after the catch, and very nearly into the endzone. If Rawls is brought along slowly, CMike takes the early RB1 role, and Prosise/Brooks aren’t healthy soon…Collins could play the 3rd down back role short term, I think.

The new RB signees made very little impression, other than Cameron Marshall having a truly tough go. One play to Marshall had Kelcie McCray (starting at strong safety in place of Kam) absolutely light up the RB. Another play Marshall struggled in pass pro (more on that later).

The tight end group was very quiet all day. I think Vannett had the only catch I remember. This could have something to do with Brandon Browner being the new designated TE hitter. Which would be a VERY cool development going forward. Especially after last year’s struggles.

Wide Receiver depth was also tested with 5 guys out. Tyler Lockett became the defacto #1 target for Russell Wilson, and he looked fantastic (7 catches, I believe). If Doug misses any length of time, Tyler is fully capable of playing the primary slot WR.

Kearse had a pretty unmemorable day, as did McNeill. Lawler looked inconsistent with one bad drop but one nice sliding grab. PRich made a nice grab of a well-defended play from Tye Smith, but the ball was thrown out of bounds. EZ Nwachukwu had a nice catch finding the gap in the zone defense over the middle. New addition Montario Hunter got WIDE open on a slow developing play…it felt like slow motion as I was literally pointing at him from the berm, “he’s got him” (meaning Russ)…and they made the play, huge gain.

Oh, and McEvoy had a really nice, away-from-the-body catch. It’s going to be tough to pick the WR5/WR6, but if it’s six kept, I’m starting to believe in McEvoy’s chances at the last spot. At the very least, I’m moving him up in my thought process for practice squad. His hands are very real, and he could easily develop nice possession target rapport with his fellow Badger, Russ. Plus, McEvoy could be your emergency QB and/or QB on scout team.

The last of the Irishmen, McCray looked very good today in place of Kam. Having spent most of camp at backup free safety, and now stepping up into starting strong safety, in addition to his special teams play; McCray is a roster lock.

The other really interesting player stepping up in the place of an injured player was Cassius Marsh. I had Marsh on the bubble before camp but, in all honesty, Marsh was the player of the day; playing more DE in place of the injured Frank Clark, while also rotating at SAM1 with the other two candidates. Cash’s hustle was incredible, his speed is better now at his lowered weight, and he just abused Webb for most of the day. Whereas Morgan and Pinkins are held to playing off the ball LB, Marsh actually gives you more of the OTTO (SAM/LEO hybrid) look that we saw Bruce Irvin used in last year. Important versatility.

The linebacker room as a whole was probably the best unit on the field Sunday. Pinkins is looking great as he’s settling in to a full-time LB role, after coming in from the draft as a CB/S. At one point, Pierre-Louis had the hit of the day bull-rushing Marshall flat onto his back. Steve Longa filled in for Coyle at MIKE2. Kyle Coleman is quietly looking very interesting as a practice squad/developmental guy. Wagner is looking very solid, and with his sack today, I’m led to think we might see more blitzing and more linebacker sacks this year.

The secondary had a quiet day. I don’t recall seeing much in the way of PBU’s or INT’s. I think Tye Smith had one PBU on McNeill, and also held his own against Kearse. I think Deandre Elliott might have been the guy burnt by the long pass to Hunter. Lane gave up a couple plays underneath. But, predominantly, just a businesslike day from the DB’s.

Which, in a sense, is also a tribute to the trio of QB’s not risking dangerous throws. When the passrush was getting home, these quarterbacks are pulling the ball down and running. There was a lot of QB running today. (Quick QB sidenote: the battle between Boykin and Heaps is closer than we think.)

Which brings us to the OL. From my vantage point, the pocket absolutely sucked pretty much all game. There were far too many instances where edge rushers were winning outside with speed, but then the interior OL is also giving up ground to the DT’s, leaving the QB’s with nowhere to throw from. They better clean this shit up faster this year than they did last.

Webb got the start at RT and he surely needs to be the first guy removed from the 1’s. Marsh, who has been primarily training at SAM, absolutely owned Webb all day. I can only imagine what Cliff Avril would have done to him (Cliff looks fantastic vs the 2’s, by the way).

Sowell split time at 1st-team LT and RT. I’d put him behind Gilliam at LT, but in front of Webb at RT.

I read that Odhiambo had some reps at RT, but I had taken off for the buses before those reps happened.

Glowinski and Ifedi seemed pretty consistently locked in as LG1 and RG1, respectively. I’m sure we’ll see that change eventually as Jahri Evans progresses. Interior OL, in general, didn’t allow “sacks” but they weren’t anchoring well versus power. Ifedi might not be as ready as we, collectively, thought (Hence, Evans).

Sokoli seemed to get many of the RG2 reps after Schwenke was released and Evans wasn’t yet available for scrimmage.

At Center, Britt started but I think Lewis stepped in with the 1’s by the 3rd series. Later, I think I saw Lewis limping a little bit, and trying to stretch his hamstrings on the sideline. Worth monitoring. And worth noting: I didn’t notice Britt much live (kind of a good thing on OL), and scrolling through the photographs, he looks like he’s handling his assignment very well today. Hunt looks decent with the 2nd team, and surprised me with his movement in run game.

The other issue with the OL today, looking at it from profile on the berm (not the best view for OL), there didn’t seem to be much in the way of running lanes. And I realize we’re down to RB3 or RB4 starting in place of multiple hurt guys, but it still didn’t feel like there was much cohesion or execution in the run game.

We need one aspect of the OL play to start clicking, and tout suite. Usually it’s the run-blocking first, which then opens up the passing game.

On a personal note, thank you to Joe, Jared, Hoa for coming by to talk Hawks. Thank you to Vannessa for the great shots. And thank you to Tye and Kate for the thoughtful gesture. Raincheck? 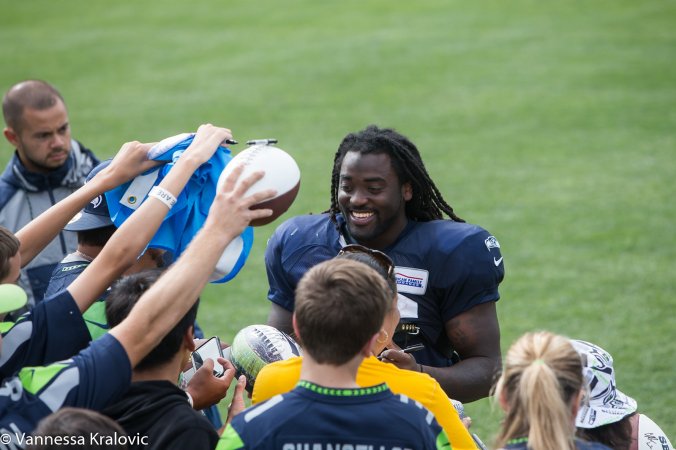 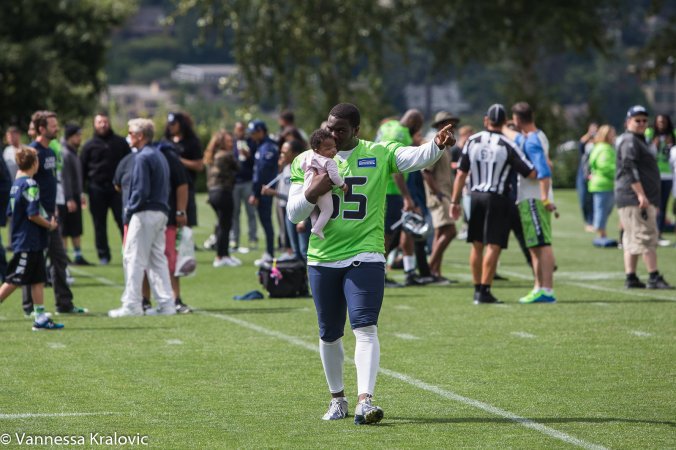